Baking, like cooking, is not all art. It requires some real calculations in adding all the ingredients to make the perfect cake. Even when you try and add your own touch to it, there are some serious basic rules that you still need to stick to and assess whether the ingredients are proportional to the needs of the right flavour and texture. You do not want to end up making a hard, brown cookie when all you wanted was for a soft, tender cupcake.

Even in my initial days, I had quite a few mishaps but the best part has been that I learnt a lot about baking from those little mistakes. In fact, I suddenly did not see my ingredients as just things that I put together to get an aromatic, edible baked product out of the oven. Rather, now I see them as important elements with each having their own role to play in making my recipe work wonders.

It is for this reason that I believe baking is all about science. And to understand how science works, you need to first know what roles some of the most common and essential ingredients in baking play. Only then, can you confidently make estimations on their quantity and produce something beautiful out of that oven. So here are some very common ingredients that we use while bake and how they customise recipes to create something different each time. 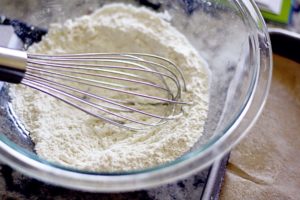 Flour forms your basic structure of the cake and quite frankly, can easily mess up your work if not added in the right amounts. The starch in the flour we use is what sets the structure for the cake. It helps in the gluten formation which decides the texture for the cake. This is why most bakers would recommend you all-purpose flour. It is because it always contains lesser gluten bread or pastry flour that allows your cake to be softer and less dense or hard like biscuits or bread dough. Know more about types of baking flour.

For most of you who aren’t aware, basic flour contains proteins and starch. Starch when heated will gelatinize which will solidify to form the structure of the cake. On the other hand, protein will form a gluten network that accordingly will be decisive in forming the texture that your baked product takes. The problem with excessive gluten formations is that it makes your batter too dense that will produce a really hard textured cake. This could be apt if you are making biscuits or cookies, but for cakes we need it to be a little denser and lighter. Which is why, I keep emphasising on not mixing your batter for too long as it only makes your gluten network stronger and your cake to be less tender. 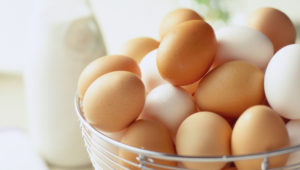 Eggs primarily act as an emulsifying agent but it has more roles to play in your batter than just that. Long before baking powders entered the market, eggs were being used as leavening agents that is it raises the cakes and give it a puffy look. Even the egg yolk smoothens the cake and adds the right amount of liquid-y texture to it. But interestingly, eggs also help to trap the air bubbles and form a rigid lining around it that refuses to let it burst when you heat the batter. As most of you will know already, the right amount of air bubbles will help to make your cake soft as a sponge, but if these air bubbles were allowed to swell up and burst, it might spoil your cake’s structure. For eggless options, read about the best egg substitutes for baking. 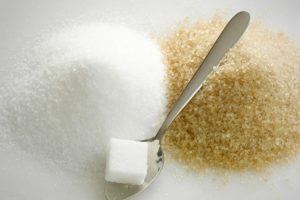 Sugar may be a sweetening agent but that isn’t all that it does to your recipe. Sugar helps to absorb moisture that keeps the cake edible and moist even after several days. It caramelises your baked goods and gives it a distinct brownish tint that is common for all cakes. One of the main reasons I suggest my people to go by the traditional way of separately beating an egg in sugar first, than to put all ingredients altogether into one bowl, is because sugar and egg together work in making those small holes or bubbles filled with CO2 that consequently makes your cake moist and gives it a structure. Know more about types of baking sugar.

The simplest distinction between both these elements have been that while baking soda includes only one ingredient which is a base known as sodium bicarbonate, baking powder contains the same base as well as acid. 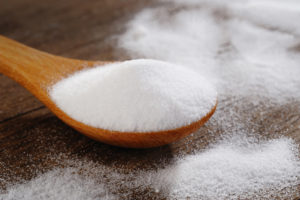 Bicarbonate in a wooden spoon

Baking soda reacts when it comes in contact with the acidic ingredients that we use in the recipe like milk, yogurt, etc. This allows it to form CO2 air bubbles that expands the shape of the batter when heated to give it a raised, puffy look. This is what we know as leavening. 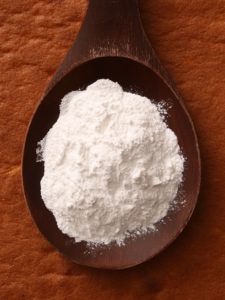 Baking powder does the same, expect because it has both sodium bicarbonate and acids (known to be monocalcium phosphate and sodium acid pyrophosphate) that allows an extended reaction to take place i.e., for the leavening to work in stages. It comes in two types: single-acting and double-acting powder. The single-acting baking powder only reacts when it comes in contact with something wet, and in case of a double acting baking powder it is a heated source. Thus, the reaction in the second case happens only after the batter as been put in the oven.

Thus, while baking soda reacts almost immediately with a rise in dough or the batter, baking powder reacts gradually so that the leavening part does not occur all at once but after the dough or batter is mixed with liquid or being heated in the oven. Baking soda demands recipe to be baked immediately or else they lose their leavening properties.

The usage of both depends on the other ingredients that are part of the recipe, for example if you are using baking soda there must be an external acidic agent like buttermilk or yogurt to react with it. In cases where no such acidic ingredients are involved, we use the baking powder. Biscuits call for baking soda, whereas soft, fluffy recipes like cakes or muffins require for an overall neutral effect in taste. Know detailed baking powder vs. baking soda.

So these are only a few ingredients that I have discussed in brief to understand how they work. Once you understand the science of it all, it is easier to determine how much of what is needed for the recipe that you have in mind. It not only helps avert a disaster but also understand the members of your kitchen cabinet better.

So I hope all of you will not only be good bakers now, but smarter bakers in terms of having un upper hand over your ingredients and recipes. Let me know if you still have an queries over any of these on the comment section below.

Until then, happy baking everyone!

(Source for all images: Google)