Eggless cinnamon sugar churros, a popular Spanish dessert recently landed in the Indian subcontinent and has been taking palates with a storm! So, I obviously tried out the recipe on my own.

Each bite of this dish brings about an explosion of tastes in your mouth with the cinnamon and sugar coating, crispy outside and the tender center, one finds himself in heaven when they have it with a semi-sweet chocolate fondue. I have tried to play with an authentic Mexican churros recipe and let me assure you that I have tried my best and I hope that this is the best recipe becomes your go-to once as fast as it became mine!

How to nail this Super Easy Eggless Churros recipe

Typically, churros, also known as Mexican fritters, are thought of to be an easy recipe and it definitely is- once you get the hang of it. Mixing the flour into the warm mixture can be a little overwhelming. Please ensure that you are doing so with the utmost patience and love- the best ingredients for desserts. Ensure that your mixture is not runny once you mix the flour. Follow the recipe and you’re all set.
Also, remember to transfer the hot and thick mixture into the piping bag with excess care as it could really hurt you if you are not careful.

The oil also needs to be right for frying otherwise it changes the taste of the churros due to excess oil. To test, drop a small amount of the prepared mixture and the oil should start boiling immediately.

Once the churros are appropriately colored, transfer them onto an oil-soaking napkin or a general tissue to drain the excess oil and only then roll them in the sugar and cinnamon mixture.

You can also get these out in fancy designs by choosing different tips of your piping bag.

Ingredients of this delicious Churros recipe

Authentic Spanish Churros recipes typically use eggs which makes the taste richer but lucky for the eggless recipe lovers here, this Churros recipe is completely eggless and I know you’re going to love me for it!

All the other ingredients used in the recipe are very, very basic and you would not face a problem with the same.

Trust me when I say this, there is nothing like fresh, warm churros. They literally touch your deepest strings.

However, many of you would like to store them for later and there are methods which can help you store them maximum for like a day or two. For example, you can line them on a parchment paper lined tray, freeze them, and fry them later on. You can transfer these into an airtight container eventually and they just might last longer. But, there are issues of them going stale or breaking as soon as they hit the warm oil. If you are planning to do either of these, I wish you all the best!

I have only mentioned a dark chocolate sauce serving suggestion down below. However, there is literally no end to the number of things you can have churros with.

To start with, substitute the dark chocolate with white chocolate or milk chocolate and proceed with the same recipe I have mentioned below. You can also just have them with Nutella or peanut butter! Cut up some fresh strawberries and/or mangoes and watch the magic happen.

If you fry these cinnamon sugar churros at home, don’t forget to share pictures with me by using #BAKEWITHSHIVESH. 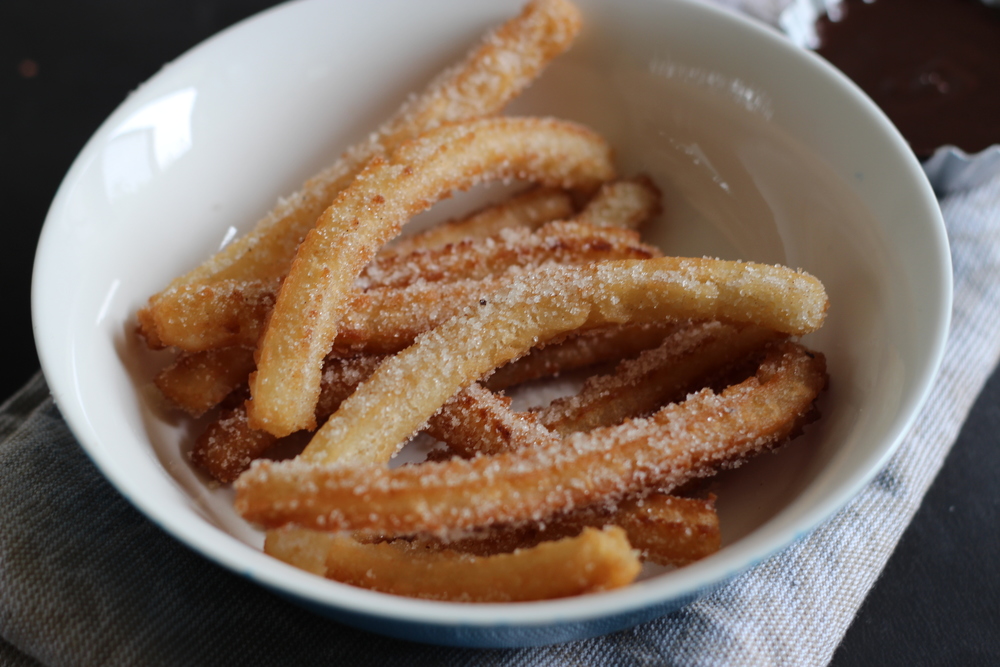 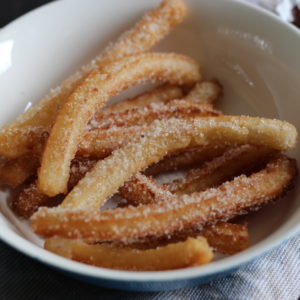